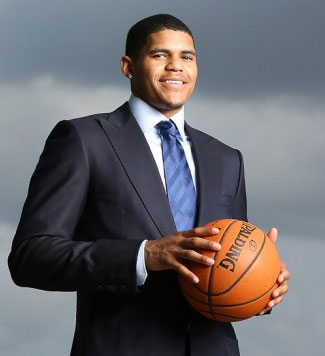 ORLANDO – Orlando Magic standouts Tobias Harris and Victor Oladipo have always seen themselves as far more than just basketball players. Basketball, undoubtedly, is a big part of their lives, but the sport doesn’t totally define them or limit the impacts that they can have on others.

And if they ever forget that, both Harris and Oladipo have very involved mothers there to remind them that their responsibilities as NBA players involve so much more than just making shots and getting defensive stops.

When they aren’t starring on the court for the Magic, Harris and Oladipo can usually be found out in the Central Florida community trying to assist others in need. Because of their selfless and tireless work in the community, Harris and Victor Oladipo were named co-winners of the 2014-2015 Rich & Helen DeVos Community Enrichment Award on Saturday night. The awards were presented at the 25th Annual Orlando Magic Youth Foundation (OMYF) Black Tie & Tennies Gala presented by Levy Restaurants held at the Amway Center.

This is the second year in a row that Harris has won the award, while it is a first for Oladipo, a second-year pro in the NBA.

“It means a lot to me,’’ Oladipo said of winning the prestigious community award. “At the beginning of the year, I wanted to get out into the community more and help as many people as I could. My first year, there was really just too much going on for me and I was trying to get used to the NBA season. But now that I have a year under my belt I wanted to get out in the community more and let everybody know that I’m here to help.’’

Said Harris: “For me, it’s always been about planting seeds in the community and then watching them grow. That’s something that we really do well as an organization here in Central Florida. I just think it’s so important to help out however I can and be a good role model because you can have a direct impact on somebody’s life. Doing that it warms my heart and it motivates me to do even more.’’

How devoted is Harris to bringing smiles to the faces of local children? One recent story tells it all about the 6-foot-9 forward’s commitment to backing up his words with actions. In January, Harris took time out before a home game to meet Trevor Scheerer, a 7-year-old who was diagnosed with a rare form of brain cancer three years ago.

A few days later, Harris received a message of thanks from the Scheerer family. Over the past two months, Harris has taken to sending Trevor daily messages via Twitter in hopes of continuing to encourage Trevor. Recently, Trevor’s parents reached out again to Harris to thank him for all he had done for their son.

“Trevor was telling me how much better he felt and his parents were saying that I saved his life,’’ Harris said through a cracking, emotion-filled voice. “That’s the kind of impact that we can have as NBA players. That means so much to me and it puts a smile on my face to know the things I do go a long way in the lives of others.’’

How devoted is Oladipo to helping out those in need. Earlier this week, Oladipo heard that 200 Magic staffers were packing meals for kids who don’t have enough to eat on weekends and during holidays when school is not in session. Even though he wasn’t originally scheduled to attend the event, Oladipo swung his house, picked up his mother, Joan, and arrived in time to assist in the packing of 12,000 meals for local children.

“I believe that it’s my responsibility to help out those who need it,’’ Oladipo said. “I really feel deep down that I was put in this position so that I could give back to others, save life and help people.’’

Each year at the Gala, OMYF honors a player who has dedicated his efforts off the court for the purpose of enhancing other’s lives. A panel of representatives selects the player. In addition to receiving the award, Harris and Oladipo each will be granted $50,000 from the Richard and Helen DeVos Foundation ($100,000 total) to donate to the charities of their choice.

Earlier this year, the Orlando Magic Youth Fund, a McCormick Foundation Fund (OMYF-MFF), presented checks totaling $1,000,000 to 21 grantee organizations from the Central Florida area. The OMYF is committed to helping children in Central Florida realize their full potential, especially those most at-risk, by supporting nonprofit organizations offering youth based programs in the areas of youth education, housing/homelessness, and health and wellness programs that promote healthy living practices for at-risk children and families. For more information, visit www.omyf.org

Here is a look at Oladipo’s off-the-court activities while working to help others:

As for Harris, here are some of the highlights from his work in the community throughout the 2014-15 season:

Both Oladipo and Harris credit their mothers – Joan for Oladipo and Lisa for Harris – for instilling in them a desire to help others. Both have taken their mothers along with them to various community events to see the good that they are doing to those most in need.

“My mother takes in pride in the stuff that I do also, and she even helps me set up some of the things that I take part in,’’ Harris said. “I was talking to her on the phone (earlier this week) and she was telling me that she was scared to come down (to Orlando for the Black Tie and Tennies Gala) because she said she would be disappointed if I didn’t win (the Community Enrichment Award). I tell her, `Mom, it’s not about winning. It’s about doing things for people who need it and trying to impact their lives.’^’’

Oladipo is also exceptionally close to his mother, and she has helped show him that basketball is only a part of his responsibility of being a professional player.

“Of course she wants me to get out in the community and help other people because she feels like that’s where I can have the biggest impact,’’ Oladipo said. “It’s an amazing feeling to see someone with a smile on their face. To be able to make someone smile, that’s an amazing gift and a blessing. What I do, it’s really all just God’s doing and I’m trying to live it out the best that I can every day. So I want to give back to others the best I can as much as I can.’’