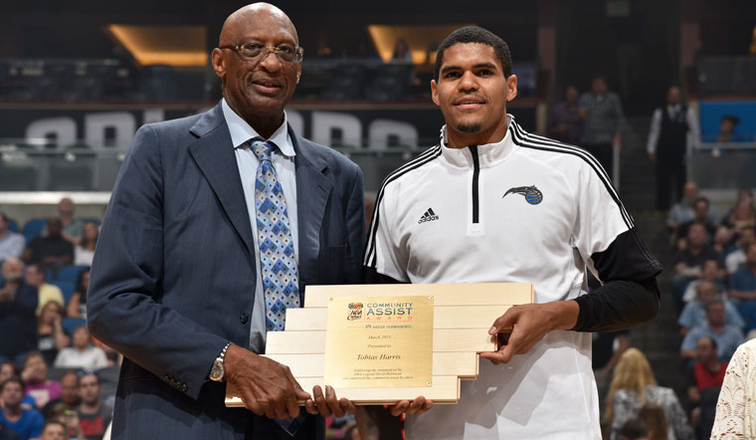 Orlando Magic forward Tobias Harris has received the March NBA Cares Community Assist Award presented by Kaiser Permanente in recognition of his charitable contributions and efforts to motivate youth in schools throughout the Orlando community, the NBA announced today. The award recognizes an NBA player each month who best reflects the passion that the league and its players share for giving back to their communities.

Kaiser Permanente and the NBA are honoring Harris for his dedication to mentoring children in Orlando. This season, Harris created “Adopt-A-School” programs in three local schools to encourage high academic achievement and positive behavior. Last month, he spent quality time with students at each school, urging them to improve their grades and remain dedicated to their education. Harris even began a book club with his mentees at Howard Middle School to engage them in regular reading. Harris has made helping underserved youth a seasonlong priority by investing in local food drives and sponsoring kids to attend games.

“I love the Orlando community and feel blessed to be part of it as both a basketball player and a role model to these kids,” said Harris. “Giving back and guiding them towards educational success is very important to me.”

During tomorrow night’s home game against the Toronto Raptors, NBA Cares Ambassador Bob Lanier, Orlando Magic CEO Alex Martins and a Kaiser Permanente representative will present Harris with the David Robinson Plaque during an oncourt ceremony. In addition, Kaiser Permanente and the NBA will donate $10,000 on Harris’ behalf to Orlando Community and Youth Trust.