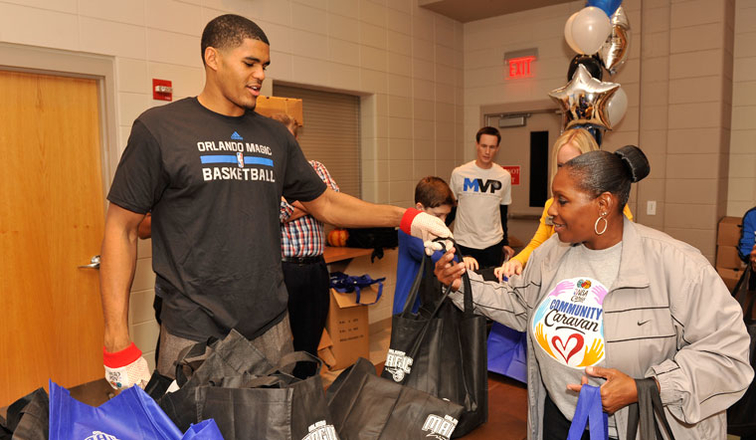 ORLANDO – On the basketball floor, Tobias Harris takes his role as a leader for the Orlando Magic very seriously. Similarly, Harris takes tremendous pride of being looked to as a role model for others when he is away from basketball.

For a second straight holiday season, Harris partnered with the Magic and Amway Corporation to distribute Thanksgiving meals to preselected families from the Rosemont, Parramore and Englewood communities on Tuesday at the Rosemont Community Center.

Harris, who was accompanied by his father, Torrel, joined Magic Community Ambassadors Nick Anderson and Bo Outlaw and the Magic Dancers to provide 450 Thanksgiving meals to underserved families in the Central Florida community.

“I’ve always been a person to give back and I love the community here. To be part of it as a basketball player and a role model and to show the kids the right thing to do, that’s important to me,” Harris said. “To give back during a holiday where it’s all about giving and being thankful – I’ve always been blessed to have a meal on my plate during Thanksgiving – and to spread that feeling to someone else’s family, it’s special. This is something that is truly important to me.” Read More